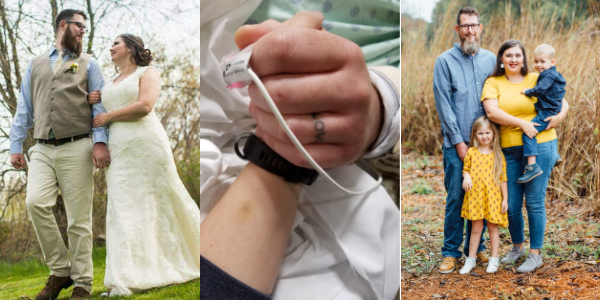 My story about Marfan syndrome mostly takes a back seat to my husband’s. He’s the one with Marfan, but that doesn’t mean we both aren’t affected.

I first learned about Marfan syndrome in 2012. I had just started dating a handsome, young airman. I knew from the start that there was something special about him, but, at the time, we were both blissfully unaware that he had Marfan. Things between us were still pretty new, and I know he didn’t want to start our relationship by telling me about his health issues, but from what he would share, I knew he was struggling.

Josh had a few scares early on that were attributed to GERD or anxiety, as well as a stress test that showed his blood pressure was elevated. It wasn’t until he let me come to one of his appointments at Walter Reed that we both knew how drastic things were.

The Day it Got Serious

I will never forget that day. Josh was scheduled for a CT angiogram and, as we were leaving, a doctor came running down the hall to stop us; he said that Josh needed an echocardiogram immediately. We learned that day that he had a bicuspid aortic valve, a dilated aortic root, and an aortic aneurysm. In the days that followed, Josh gave me the opportunity to leave, thinking I didn’t want to stick around waiting for what was to come. I stayed.

A few years, a medical discharge from the Air Force, a confirmed FBN1 gene mutation, and several ER visits later, I agreed to marry this man. On April 25, 2015, we exchanged our vows. In mine, I borrowed a line from E. E. Cummings and promised to always carry Josh’s heart on mine.  Little did I know that would be true all too soon.

A little over a month after we were married, we found out we were expecting! Because of Josh’s Marfan diagnosis, we were nervous and cautious and monitored this baby’s heart closely. She was born without Marfan, but she did have another condition, Pierre Robin Sequence. After fifty days in the NICU, we were home as a family. We thought the worst was behind us. But we thought wrong.

Then it Got Really Scary

Less than two months later, when I was back to work, Josh was at home with our girl and all was well. Or so we thought. Josh called me to let me know he was in the emergency room with chest pain (he had asked his mom to come to watch Charlotte). He didn’t want me to worry so he figured he would go to the ER and get home with an all-clear before I got off work. Instead, when he called, he said I needed to come. I left work and within four hours we were at Vanderbilt where Josh was admitted and prepped for surgery.

The next few weeks to a month is a blur. It was honestly the most emotionally intense, spiritually draining part of my life. I had just given birth to a child with some special medical needs and now my one and only support were having life-saving surgery.

I remember the doctor coming out to tell us the surgery was a success; I almost collapsed from relief. If I were to tell you that I had honestly contemplated suicide in this time frame, I would not be lying. It felt like I was drowning. I was trying desperately to hold it all together — work, pay bills, care for my child and my husband.

This is often the case for loved ones of people with Marfan. We don’t endure the daily pain, the multiple doctor appointments, the fear and anxiety of worsening health, surgeries, and more, but we try to carry on for the ones who do. We try to hold it all together and encourage our loved ones to keep living, to keep pushing forward through it all. We sit and we listen to the daily random pain reports, we make sure that medications are taken and doctor appointments are made. When I told my husband I would carry his heart in mine, this is how I do it.

Monica Newnam is a community chair for the 2022 Nashville Walk for Victory, which is on April 9. Join or support Team Newnam by clicking here.

Monica Newnam, lives with her husband, Josh, and their family in Rockdale, TN.

When my daughter, Gabriella, was diagnosed with Marfan syndrome at the age of five our family was...

I was diagnosed with Marfan syndrome around the age of 12 years old, while growing up in Meridian,...

From the Journal of Owen Gray: 2015 Annual Family Conference

Owen Gray, 14, was diagnosed with Marfan syndrome in the summer of 2014. He was excited about...