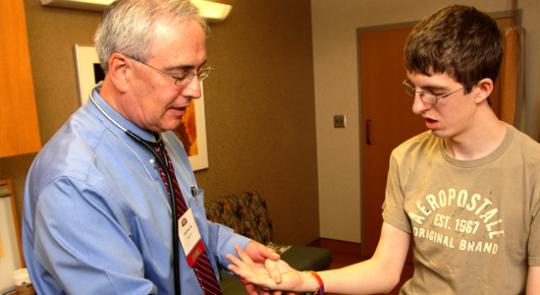 One in five people with Marfan syndrome had some form of surgery before they were diagnosed with the potentially life-threatening condition, according to a survey of 1277 people conducted by The Marfan Foundation from July 21-August 18, 2013. The survey was conducted to identify the signs that lead to a Marfan syndrome diagnosis and better understand the diagnosis process that people go through.

“It is concerning that so many people had surgery to repair their aorta before they got their Marfan diagnosis,” said Alan C. Braverman, MD, Director of the Marfan Syndrome Clinic at Washington University School of Medicine and Chair of The Marfan Foundation’s Professional Advisory Board. “If they were able to be diagnosed with Marfan syndrome first, they could have undergone preventative aortic surgery before the aorta dissected. Many patients do not survive acute aortic dissection. People with Marfan syndrome who undergo surgery for an enlarged aorta may often expect to live a normal lifespan. However, the long-term outcome after an aortic tear occurs is not nearly as favorable.”

Marfan syndrome is a genetic disorder that affects the body’s connective tissue. Connective tissue helps to hold the body’s cells, organs, and tissues together and also helps to control how the body grows and develops. Because connective tissue is found throughout the body, Marfan syndrome can affect many different parts of the body, as well. Features of the disorder are most often found in the heart, blood vessels, bones, joints, and eyes. Some Marfan features – for example, aortic enlargement – can be life-threatening. The lungs, skin and nervous system may also be affected. Marfan syndrome does not affect intelligence.

Among people surveyed, the features that most often raised suspicion of the condition were skeletal abnormalities, especially long limbs (67%); long, flexible fingers (63%); flexible or extremely loose joints (51%); greater height than other family members (43%); chest bone that either sinks in or sticks out (42%); and curvature of the spine (33%).

Other features that raised a red flag were unexplained stretch marks (28%) and a dislocated lens in the eye (23%).

“The diagnosis of Marfan syndrome is based on a collection of characteristics, and many of them are common in the general population. Together, however, they could indicate an underlying problem that affects the heart and blood vessels and can be life-threatening,” said Dr. Braverman. “The skeletal and eye problems of Marfan syndrome require ongoing monitoring because they may worsen as people age and interfere with quality of life. In addition, it is vital that patients see a cardiologist because most people with Marfan syndrome have dilatation or enlargement of the aorta or mitral valve prolapse, and the aortic enlargement can lead to a fatal aortic dissection without monitoring and treatment.”

Getting the diagnosis for Marfan syndrome is not always easy because it requires several tests done by different specialists: an echocardiogram or CT scan by a cardiologist, a slit-lamp eye exam by an ophthalmologist, and a skeletal exam by an orthopedist. Usually, a medical geneticist is also involved. While nearly half of people surveyed indicated that their diagnosis was confirmed in three months or less, almost one in five said it took them seven months or longer to receive a confirmed diagnosis.

One respondent who explained how her daughter was diagnosed said, “The only way we got a specialist to consider something out-of-the-box was by sending pictures of our daughter’s hypermobility. Until then, all the specialists blamed her issues on normal teenage girl stuff. Once the cardiologist saw her extreme flexibility, he got us in immediately and set up an appointment with a geneticist. More doctors need to look at the whole body for clues to what might be going on.”

The Marfan Foundation creates a brighter future for everyone affected by Marfan syndrome and related disorders. We work tirelessly to advance research, serve as a resource for families and healthcare providers, and raise public awareness. We will not rest until we have achieved victory.

The Marfan Foundation is saddened by the loss of Dr. Vincent Gott, one of the true pioneers in...

Today, Aytu BioPharma announced their intention to conduct a drug therapy trial for...