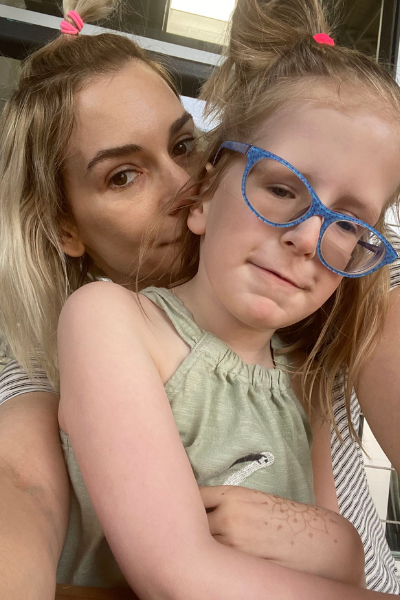 Marfan Awareness Month is a time to raise awareness of Marfan syndrome among the public and healthcare community, as well as in the Marfan and related conditions community. Shana Kusin, MD, has a unique perspective.

What is your connection to Marfan syndrome?

I’m an emergency physician in Portland, OR, and mom to an extremely precocious, bespectacled, musically inclined, long, and lean 5-year-old with a diagnosis of Neonatal Marfan Syndrome. Her mutation is spontaneous, meaning that she did not inherit Marfan, and no one else in our family has had it before. We were very lucky that, through some amazing doctoring and a lot of things aligning just right, her diagnosis was suspected in utero, and she was officially diagnosed at two days old. Because of this, we’ve been keeping close watch over her aorta, her vision, and her skeletal growth and development literally since the beginning.

Why is education important for people with Marfan (and their caregivers) and the healthcare community?

Most doctors learn about Marfan in medical school, but they may not encounter many patients with it in their practice, and many of the additional issues involved in Marfan – like dural ectasia and visual issues beyond ectopia lentis – are less well known among doctors than aortic dissection. When affected people can advocate for themselves and feel comfortable asking questions about things they’ve read or learned about, it only serves to strengthen their relationship with their medical team, and it adds to mutual satisfaction and more nuanced, individualized care.

In the case of my own daughter, I can say that, even as an academic physician who felt well educated and appropriately vigilant for the signs of undiagnosed Marfan presenting in the emergency department, I had never learned before that Neonatal Marfan Syndrome was its own “thing.” Of course, I realize that my experience as the parent of a child with Marfan may be a little different since I’m also a physician, but the conversations I’ve had with her cardiologist, ophthalmologist, and pediatricians along the way have prompted some incredible learning and collaboration for all of us.

What do you wish more doctors understood about Marfan?

Before I was a Marfan parent, I never fully grasped the extent to which Marfan touches all aspects of patients’ lives. My daughter is absolutely thriving, and while I admit I’m a little biased, I think she’s objectively one of the most memorable children most adults who meet her come across. However, she has to sit at the very front of the room at school at all times, even if this ends up singling her out because her vision is so poor despite her corrective lenses. She often ends up playing with younger kids on the playground during recess because she simply can’t run as fast as her pre-K classmates, and she tires of getting left behind on the playground. She also fatigues easily with minimal exertion, which I have to take into account when we make plans for fun activities. And she has doctor appointments seemingly all the time. I just don’t think that, as a physician, I truly understood what a subtle, cumulative toll this could take on a person. My empathy as a clinician has grown exponentially since she was born.

How does education impact awareness?

There’s a mantra in medicine, often offered up somewhat jokingly, that goes something like, “if you don’t check a temperature, you won’t find a fever.” In the case of Marfan, I take this to mean that it’s important to know what you don’t know, which applies to everyone: patients, caregivers, and care team members. Want to take your Marfan knowledge to the next level? Visit our website to access the comprehensive array of materials in our Resource Library, recordings of educational webinars from medical experts, the latest in diagnosis and treatment options, and much more!

5 Things You Can Do for Marfan Awareness Month

Do you still get blank stares from people when you say that you have Marfan syndrome? How many...