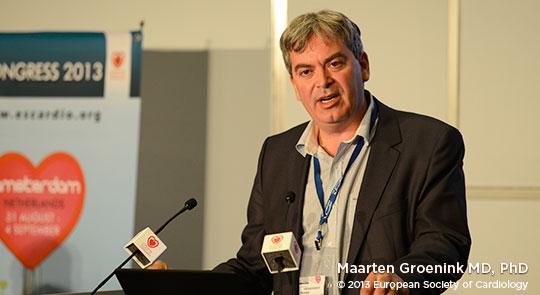 A common drug that is used to treat high blood pressure in the general population has been found to significantly reduce a dangerous and frequently fatal cardiac problem in patients with Marfan syndrome.

AMSTERDAM, The Netherlands, Sept. 2, 2013 – A common drug that is used to treat high blood pressure in the general population has been found to significantly reduce a dangerous and frequently fatal cardiac problem in patients with Marfan syndrome.

Results of the COMPARE (COzaar in Marfan PAtients Reduces aortic Enlargement) study reveal that patients treated with losartan (Cozaar) had a significantly reduced rate of aortic enlargement after 3 years compared to patients who did not receive the treatment.

“Our study is the first large, prospective randomized study to assess the effects of losartan on aortic enlargement in adults with Marfan syndrome, and confirms previous findings in a mouse model,” said lead investigator Maarten Groenink MD, PhD from the Departments of Cardiology and Radiology at Academic Medical Centre in Amsterdam, The Netherlands. “We’re very excited to see that such a commonly used drug that is not expensive and has a familiar side-effect profile could have a significant effect on this very serious and frightening risk factor for these patients. These findings may change standard clinical management.”

Marfan syndrome, a heritable connective tissue disorder, affects 2-3 in 10,000 people. It causes progressive enlargement of the aorta, making it prone to rupture, which can be fatal in more than 50% of cases. Currently, the only effective treatment is prophylactic surgical aortic root replacement.

In addition to lowering blood pressure, the main benefit of losartan is believed to be its interference with the biochemical process that causes aortic enlargement.

To assess this, the COMPARE study included 233 participants (47% female) with Marfan syndrome from all four academic Marfan screening centers in the Netherlands.

Subjects were a mean age of 41 years, 27% had previously undergone prophylactic aortic root replacement, and the majority (73%) were being treated with beta blockers.

During the study period, if patients in either arm required prophylactic aortic root replacement the decision was left to the discretion of the attending cardiologists based on existing guidelines and anticoagulation therapy was initiated when appropriate.

In Marfan syndrome, aortic enlargement is usually confined to the ‘aortic root’, but may also extend beyond it. The study showed that aortic enlargement beyond the root was not significantly reduced by losartan. However, among the subset of patients who had already received aortic root replacement, dilation in one section, called the aortic arch, was significantly lower in patients treated with losartan compared to controls (0.50 mm vs. 1.01 mm; p=0.033).

“This result should be interpreted with some caution as baseline aortic dimensions of patients with prior aortic root replacement were not completely comparable between the groups,” said Dr. Groenink.

Although the reduced rate of aortic enlargement in the losartan group suggests this drug may postpone or even prevent aortic rupture as well as the need for prophylactic surgery in Marfan patients, the study did not actually demonstrate this result.

“The incidence of clinical events was low in our study and therefore the clinical relevance of losartan treatment on aortic surgery and aortic dissection could not be determined,” said Dr. Groenink, adding that only a larger prospective trial with longer follow-up can ultimately determine this outcome.

Funding: This study was funded by a grant from the Dutch Heart Association (2008B115) and supported by the Interuniversity Cardiology Institute of the Netherlands (ICIN).

In recognition of the significant contributions of volunteers throughout the country, The Marfan...

The Marfan Foundation is pleased to announce the addition of Andrew Toy, President and Chief...