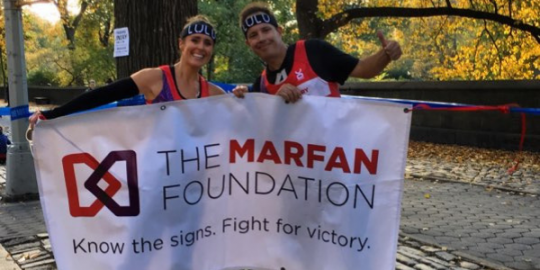 The Marfan Foundation is again a charity partner in the 2019 TCS New York City Marathon, which will take place on Sunday, November 3, 2019, through the five boroughs of the city. The Foundation has been allotted 10 slots in what is the most prestigious marathon in the world. One slot has been claimed and nine are still available.

Sara Maher, of Garden City, NY, has run in the New York City Marathon for the Foundation for the past three years. Each year, she was motivated along the route by the thought of her daughter, Lulu, who was diagnosed with Marfan shortly before her second birthday.

“Running the New York City Marathon for the Foundation was the perfect opportunity for us to raise funds for a cause so close to our hearts as well as achieve personal goals of our own,” said Sara, whose husband, Bryan, also participated.

If you or someone you know (who does not have Marfan or a related condition) would like to be part of the Foundation’s marathon team, please contact Deborah Goodman for an application. She can be reached at dgoodman@marfan.org or 516.883.8712 ext. 154.

Those who are accepted will be required to pay their own registration fee (approximately $400) directly to the race organizers and then commit to raising $3,000 for the Foundation. Deborah works directly with everyone on the team to help them reach their fundraising goal.

All money raised for The Marfan Foundation goes towards education and support programs and services for people living with Marfan, Loeys Dietz, vascular Ehlers Danlos, and other related conditions.

Note: Competitive and contact sports can put people with Marfan syndrome and some of the related conditions at increased risk of injury. Doctors worry about increased heart rate, increased blood pressure, and bearing down because they can put added stress on the aorta; head impact that can damage the eyes directly or indirectly, through deceleration or acceleration, because this may lead to worsening lens dislocation or a retinal detachment; extensive stress on the bones and joints, which can lead to added pain and dislocations; and bruising and internal hemorrhaging due to certain medications (i.e., anticoagulants).

The Marfan Foundation and Johns Hopkins Hospital Co-Host the 30th Annual Family Conference for People with Marfan and Related Disorders, July 10-13, in Baltimore

The VEDS Movement, a new division of The Marfan Foundation, is excited to announce the launch of...