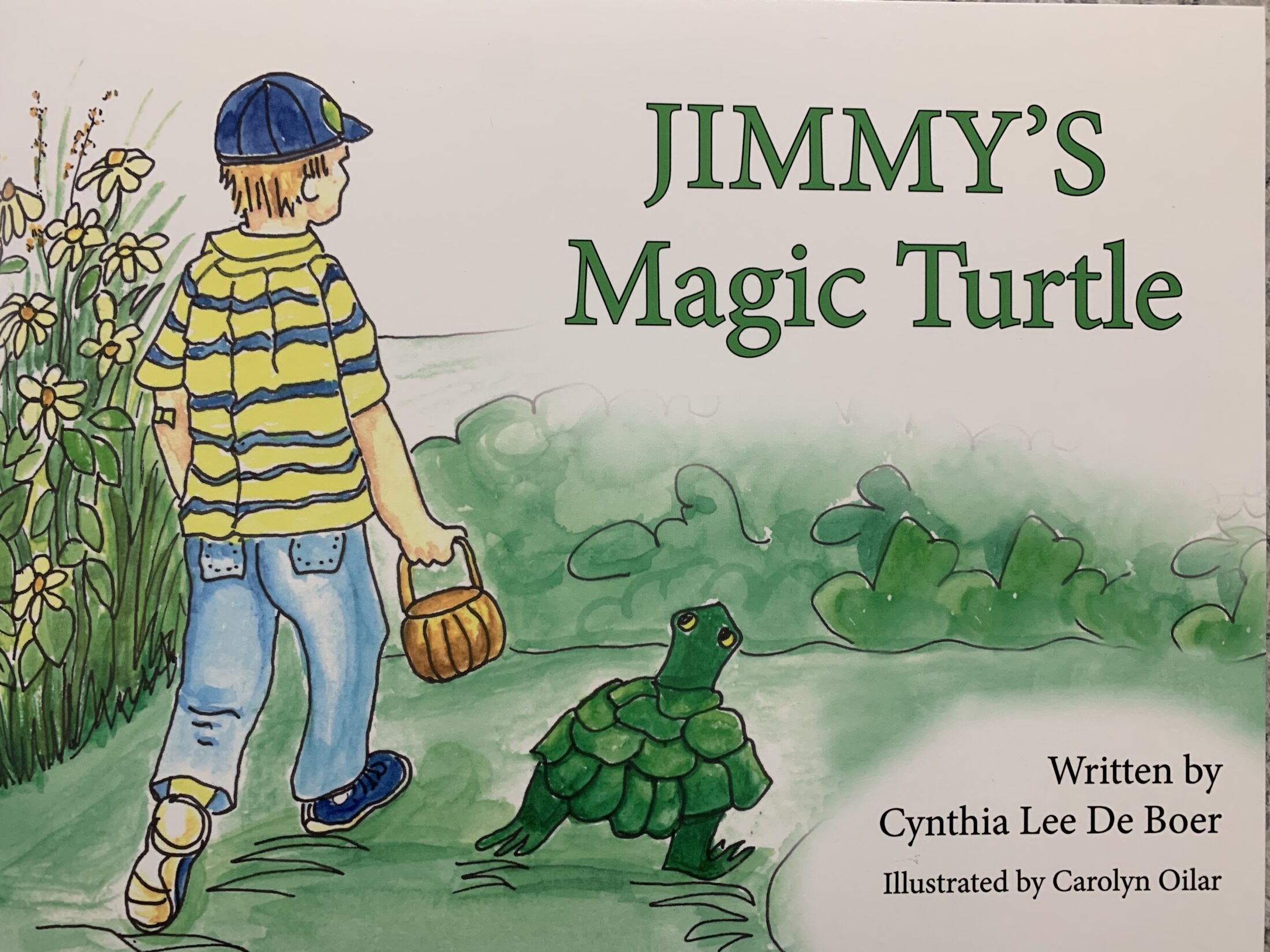 Cynthia De Boer’s nephew, Jimmy, was born with a very severe form of Marfan syndrome (known as neonatal Marfan syndrome) more than 20 years ago. Motivated by the realization that Jimmy “would never have a chance to grow and imagine ‘what if’,” she had an idea for a book, based on a childhood experience she had with her sister, Jimmy’s mom. Now, she is unveiling her tribute to baby Jimmy, a children’s book titled, Jimmy’s Magic Turtle, and working to raise awareness of Marfan and funds for education and awareness.

As small children, my sister, Penny, and I had a pet turtle. This little guy seemed magical because he could tuck his head and tail into his body. It was the most fascinating thing we had ever seen. We wondered what it was like inside his shell and what he did. Our imaginations ran wild and some of what we imagined came back into my mind and became Jimmy’s Magic Turtle.

The journey from conceptualization to book launch has taken nearly twenty years and has had many highs and lows. A month after Jimmy’s death, I was thinking about him and what he would have been like as he grew up. That’s when rhymes and my own childhood memories came rushing into my mind and onto the page.

The Journey to Publication

It was really important to me to use the book to honor Jimmy’s life and to help other families with babies born with neonatal Marfan. I also felt that focusing on a childhood memory shared by his mother and me was perfect. I discussed the idea with my sister, who was thrilled beyond belief, and the search began for the perfect illustrator.

Through the years, I contacted a multitude of illustrators and hired four. The first three seemed invested in the project and eager to help. Then months would pass without a word. When I would contact them, they would say they hadn’t gotten around to it or that other things were more pressing. Each time this happened, I became disheartened and would shelf the book, feeling it must not be the right time.

After the third illustrator let me down, a friend noticed I was upset and asked why. Up to that point, I had never mentioned the book to her and, when I explained my frustration, she said her mother was a retired art teacher who had always wanted to illustrate a children’s book. That’s when Carolyn Oilar entered my life. We began working together in June 2016. She has been invested and passionate about Jimmy’s Magic Turtle from the moment we discussed it and the connections we share are amazing.

To say that things come in their own special time is definitely true in this case. The long years of hopeful anticipation and letdowns have finally ended and I couldn’t be more pleased and proud of how wonderfully Jimmy’s Magic Turtle has come to life. The completed book arrived at my home Thanksgiving week 2019. Little Jimmy was born and died during Thanksgiving week in 1999. He would have been twenty years old when the book finally became a reality.

When Jimmy died as an infant, my sister and I searched for the cause and all of our research led to Marfan. We decided the best way to honor Jimmy’s short life was to spread awareness and to help raise money while sharing the wonder and magic of a child’s imagination through Jimmy’s Magic Turtle.

Supporting The Marfan Foundation is our way to help others, to give meaning and a reason for Jimmy’s short life. It’s a way to pay tribute to him and hopefully prevent this type of tragedy from happening to others in the future.

I hope Jimmy’s Magic Turtle will bring joy and hours of entertainment to every person who reads it. And through that joy and learning the backstory of the book, I hope to educate them about Marfan, and to inspire them to support and help where they can.

Cynthia has a Medical Story Too

I was born with glaucoma and a narrowing in the aortic valve near my heart. By the time I was six years old, I had undergone two open-heart surgeries, one at two weeks of age, three eye surgeries, and had flat lined three times. I was even given last rights on one of those occasions. My young parents were told I was going to be blind, significantly impaired intellectually, and never reach the age of sixteen. They also warned of a third defect as birth defects often come in threes. The third defect was discovered at age forty in the form of three benign Epidermoid brain tumors. My left eye is a prosthetic and I am legally blind in my right eye. Still, I have beaten the odds and writing has always been a part of my life. I am an author, speaker, and disability advocate. My first two books are inspirational non-fiction self-help books packed full of vital information. I believe having a disability does not make you less of a person; it makes you more of a human being!

Jimmy’s Magic Turtle is now widely available, in time for Marfan Awareness Month. To purchase a 12” X 9” Signed Edition of Jimmy’s Magic Turtle with a Free Coloring Page go to Cynthia’s website or Amazon. The book is also available through Barnes & Noble. Cynthia will donate $1 from each book sold to The Marfan Foundation in Jimmy’s memory.

If you are anywhere near Henderson, Nevada, on February 29, you can meet Cynthia at the King & Queens of Education, an event put on by The Coffee House Tours. They are a group of forty local authors who work with coffee shops and bookstores to hold book signings in a multitude of genres. At Cynthia’s table, she will be featuring Jimmy’s Magic Turtle give out Marfan Foundation information and swag. The event is from 1-3 pm at Ethel M’s Chocolate Factory (2 Cactus Garden Dr., Henderson, NV 89014).

Do you want to get involved in Marfan Awareness? Join one of the Volunteer for Victory teams. Check them out here.

Cynthia Lee De Boer is an author, speaker and disability advocate. She helps people change their perspectives on disabilities and depression by speaking about her life’s lessons.

Suffering in Silence No More

Content Warning: This article will discuss a specific person’s experiences with suicidal...

Maggie, with her mom, Jennifer, at the Foundation's Boston Walk for Victory in June. As...

[vik-tuh-ree, vik-tree] A success or superior position achieved against any opponent,...