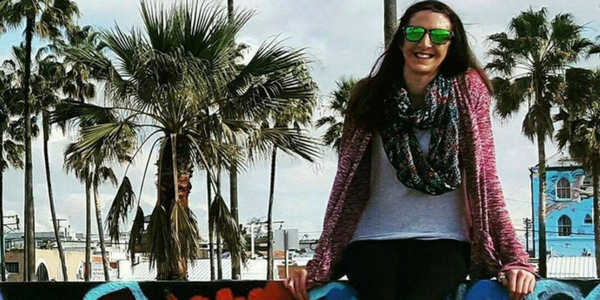 Life is constantly in session, whether I am ready for it or not. There is a never ending battle where I fight to gain a sense of control over my life while living with Marfan syndrome. The moment I was born, the doctors diagnosed me due to my physical features of long toes and fingers and my inherent heart complications; I had a mitral valve prolapse and my aorta was dilated.

From an early age I encountered various surgeries, such as dislocated lens and scoliosis correction. My parents were always supportive and reassured me that I was going to be fine; they did not want me to worry nor feel different. However, I did feel different and I was different. I have an older brother who never went to constant doctor visits, his heart wasn’t being monitored, but mine was and I did not understand why. The frustration and confusion that surrounded each surgery and each doctor’s visit continued throughout my childhood; Marfan had control of my life. Though I never blamed Marfan nor imagined my life without it, I did feel frustrated as I was often unprepared for the reality of my symptoms.

There were certain activities I was recommended to go “easy” with, but that was not a satisfying answer for me. I had to experience the activity. I had to figure it out for myself. I never did anything extreme where it would damage my heart because I understood that was serious, but I did not like being told to take things easy. I figured that if I had goals and passions then I would have a sense of control.

Little did I know at the time that this is not how life works because life is constantly in session for Marfan and me. I never planned to be home schooled, but I was because I missed so much school because of scoliosis recovery. On top of that, I was being bullied for looking and being different. I had a constant fear of something happening and not being in control.

When I was old enough to go back to school, I felt it was out of my control again. The health complications did not stop, the bullying continued, and frustration built up. I kept pushing myself to achieve more no matter what happened. I pleaded with my cardiologist to have my open heart surgery while I was in high school because I did not want it to affect my college career. I fell into consistent struggle with control and acceptance. I thought that if I could just have some sense of control then I would accept having Marfan. That wasn’t the case. Every time I thought there was a sense of acceptance, it was actually confused for having a sense of control.

When I was 20 years old and in college, I had the option to have an ablation for my arrhythmias. I figured if it could just stop then I would maybe start to accept it. Little did I know, the ablation would be another situation that spiraled out of my control. The surgery “worked” for half of my heart, but not the other chambers. This led to me being ‘blasted” by my ICD six months after the surgery. There were moments where I would cry; I did not want to keep going on. I could not see an end to this constant lack of control over my own life. Even though there was the desire for control, I never “blamed” or “hated” Marfan. Instead I blamed myself for not being able to know my body, for not being able to stay “happy” when things felt like they were going wrong.

College went by with constant challenges. How do I accept that I am legally blind in my left eye? Is it even fair for me to be upset about this? Things could always be worse, right? Still, the desire for control was stopping me from accepting Marfan. I spent two years in therapy talking about my life with Marfan, explaining situations that I never told anyone before. The deepest secrets and questions like how will I be able to truly feel comfortable in my body? By the end of my college career in New York, I applied to graduate schools in California.

All of my family is in the New York/New Jersey region and there is no one out in California that I know. My thought process was — if I could not have control over my own body then I would not let my body have control over me. I knew that I wanted to experience the world and I could not always have someone near me every second. I wanted to feel a sense of “independence” and “adventure.” I spoke with my parents and they were hesitant to have me move so far away, especially because I have a history of spontaneous medical emergencies. I understood their worry because I felt the same way, but I knew that I had to have this sense of control. I made sure to find a cardiologist before moving out there, which led me to Stanford and their expertise in Marfan.

I moved to California and started attending graduate school for my doctorate in clinical psychology. I was doing well in my classes, I was settling in, I was living independently and experiencing true freedom for the first time in my life. Then, life threw me the biggest curveball yet. I went to my cardiology appointment and heard the news that “within the next year or two you will need surgery on your mitral valve and aorta.” My first feeling was anger; this was not in my plan. This wasn’t supposed to happen for at least another five years, if ever at all. With the news, I had to figure out how to plan this major surgery around my already busy schedule and course load.

My passion for the field kept me going, but I experienced numerous emotions before the surgery. I scheduled the surgery for the following summer and figured I might as well get it over with. I was terrified, and I cried almost every day. I was angry that I felt so alone. I was upset because this was going to be my 14th surgery. Then I tried my best to change my perspective; “this was it!” I thought, “I’m finally going to have my heart fixed. The battle would be over after this!” I spent the year attending therapy twice a week and worked through every fear and concern I had.

On the day of the surgery, my family and I went to Stanford at 5am. I went in shaking like a leaf. I gripped the anesthesiologist’s hand and told her to make sure they fix my heart. After 11 hours, they were able to repair my valves. The recovery process was out of my control, and I was trying to ride the waves. As an infection came a month later, weakness and sadness overrode. Though I kept going, I had to strive to have a type of acceptance.

Time went by and I healed from my surgery, but before I knew it, I needed another surgery. I had pushed myself to get back to my life, but with this new necessary surgery on the horizon, finally it dawned on me. I started to slowly let go of the control. I felt a sense of acceptance towards my lack of control and found passions that could keep me going. I leaned on my family and friends when needed. I’ve learned that, regardless the surgery, control will not come, but a gentle understanding will happen.

This is what led me to my current research within the psychology field. How does Marfan psychologically impact an individual? What are the tools that can help someone when forced to face their biggest fears? I started researching and thinking of new approaches. Then I started interviewing and analyzing data. In the psychology field, there is minimal research on helping individuals with Marfan. My passion and goal is to raise awareness for the psychological impacts that could happen and to create coping mechanisms for individuals of all ages.

I wish to provide a space for people to experience their journey and find their voice. I now believe it is necessary to allow myself to experience the anger and the sadness; I also believe in allowing myself to find the beauty in life and the passions that make me smile. The field of psychology has been one of my biggest passions and working with other individuals who have Marfan and related conditions has kept me constantly fighting.

Stephanie is one of the featured speakers at the Birmingham (AL) Regional Symposium on Marfan Syndrome and Related Disorders on October 28, 2017. Her talk is titled, Emotions and Marfan: A Practical Guide. Click here to register.

Stephanie Randazzo is a native New Yorker now living in California working towards her doctoral degree in clinical psychology. She is always up for an exciting adventure in the outdoors! Her family and friends are a large support system in her life.

Improving Your Quality of Life: An Introduction to Reflexology

Reflexology can help reduce pain and increase energy. It is not a cure, but it can make the...

Nutrition, Weight, and Quality of Life – Part 3 of 3

In recent blog posts, we shared Alix McLean Jennings’ story about how she worked with a...

Why I’m Grateful for Marfan Syndrome

I was recently reading a book called How to Live a Good Life by Jonathan Fields (which I highly...